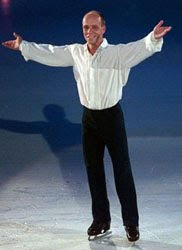 Flipping channels the other night, I stopped to catch a few minutes of figure skater Scott Hamilton’s special on Biography, and I was quickly sucked in for the whole two-hour show. What a charming guy. And what a story teller.

Hamilton framed his whole career through the lens of medical adversity and, although at times the schmaltz factor was way off the charts, his message about perseverance hit home in this house. I liked the vibe of genuineness – they filmed him wheeling his own bags through the airport, for pete’s sake. And I liked his honest assessment of failure – no slick and slo-mo, worship-at-my-altar shots like you see over on ESPN. Instead, he spoke to the camera about how his success never would have happened if he didn’t fall down so much (literally and figuratively). Every time, Hamilton just got up and tried that much harder. The strategy earned him an Olympic gold medal, a lucrative business producing ice shows, and apparently quite a lot of personal happiness.

The whole experience got me thinking about celebrity patients. Lance Armstrong turned his illness into a mega-million-dollar conglomerate to fight cancer. Who could forget Katie Couric’s colon (well, we can try). Christopher Reeve put a face on spinal cord injury and paraplegia.

Despite all the good they do, however, we live in a world where we’re bombarded with causes in favor of this, and against that.
It’s easy to tune out.
And so refreshing to come across one that stands out from the noise.