Now, Here’s One For You 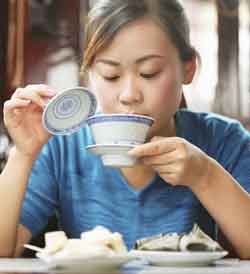 Last time, we suggested a question for your doc - “what happens next?” – as a way to really get to the nuts and bolts of what you need to know about your diagnosis. Today we’ve got a great pop quiz for you, the patient.
“What do you think is going on?"

I was at the doctor’s office recently because my teen had fainted on the job. The doctor (actually it was a third year medical student) tossed out some questions to try and figure out why, but nothing was a match. Then, as an afterthought, I mentioned we were worried about her diet. She wasn’t eating right and drinking an awful lot of tea. Suddenly, the diagnosis became crystal clear. Turns out tea can quickly rob your body of iron, leading to anemia and, therefore, fainting. A simple blood test confirmed she needed to cut down on the Darjeeling and take a supplement to bring her iron levels back to where they should be.

Doctor-turned-patient Roni Zeiger told his own story here about arriving in the emergency room with bleeding in his brain. He used his clinical skills to relate his symptoms in a succinct and articulate way to the attending physician, just like we preach here at patientlovingcare.com. Afterward (and thankfully the bleeding issue proved to be minor and there was an “afterward”) Dr. Zeiger contemplated why he hadn’t gotten more personal with the staff.

The summary he gave was “brief, clinical and effective,” he wrote. “It told the doctors what they needed to know, but it was missing two important things. First, it lacked humanity. Why didn’t I tell my doctors that I was scared, that I was worried about the future of my wife and children?...Second, I didn’t tell the doctors all of my symptoms and the events surrounding them. Without even thinking about it, I only told them what I thought was relevant. In fact, a common mistake we doctors make is getting too attached to the first diagnosis we think of, and then failing to ask about other symptoms, other clues.”

So how do you distinguish between adding relevant personal details and rambling on with TMI? Well, a good doctor will know how to tease out the info that really matters. But practicing patientlovingcare.com’s commandments to be succinct and articulate is a good place to start. Take a moment to collect your thoughts before diving into a story in the exam room. See if you can get to the heart of your comment in just a sentence or two. Or just test out a possibility by saying “this might not be relevant, but what about… (tea, for instance, or whatever is on your mind).”

Opening up a little just might be what the doctor ordered.
Posted by Elaine Finn at 7:36 PM