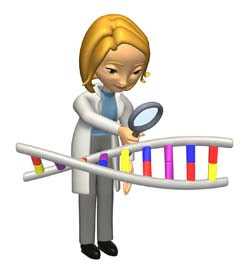 Did you see a guy in California had $50,000 worth of testing done on his DNA? He’s a professor of bioengineering who let his colleagues at Stanford University study his genetic information to see if they could predict future medical risks in a healthy person. According to the US News & World Report article, Stephen Quake now knows he’s got a 23 percent chance of developing prostate cancer but only 1.4 percent risk of Alzheimer’s disease. And more likely than not, the currently svelte and 40-ish professor will wind up fat and diabetic, with a touch of coronary disease. Or so say his genes.
What about you? Would you want to take a peek into your genomic crystal ball? Not me. I’m too suggestible. Every time someone says that in women heart attacks can present as gastric symptoms, I immediately start to burp. I’m already highly skilled at worrying about the problems of the moment. (Hey, doesn’t that run in families??) If my genomic test turned up something dire, chances are I’d feel more helpless than heroic.
My philosophy is that generally healthy living will stave off all sorts of ills. So (ignoring for the moment issues like folks interested in errant genes that could be passed along to future children) why know the specifics. I already know there’s breast cancer in my family tree, so I do all the right things: I get regular check-ups, I exercise, the kids were all breast fed, the thought of a breast lump inspires me to take that extra serving of broccoli. But the benefits of doing all that aren’t exclusive to breast cancer risk. All of the above might stave off other cancers, mental illness, heart disease and its related conditions, just to name a few.
Privacy and ethical issues aside, do you have the personality to live with the results of a test like Quake’s? He put it like this: “It doesn’t tell you you’re going to be happy or a great athlete,” he told the Associated Press. “If you’re a worrier, this is not for you.”
Posted by Elaine Finn at 5:16 PM