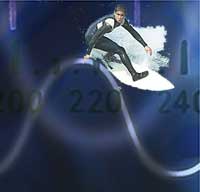 Of course the healthy status quo could turn on a dime, concerning my son or anyone else in the family. But for now I’ll believe we’ve scaled a peak and are coasting the down slope. How I’d love to keep it that way.
Posted by Elaine Finn at 12:44 PM

Elaine, I read your post with tears of joy. Such good news that your family's journey has turned down a kinder path. How great that your son has gone on to college and continues to do well. Nick and I send our best.
-Eniko

Thanks so much, Eniko!